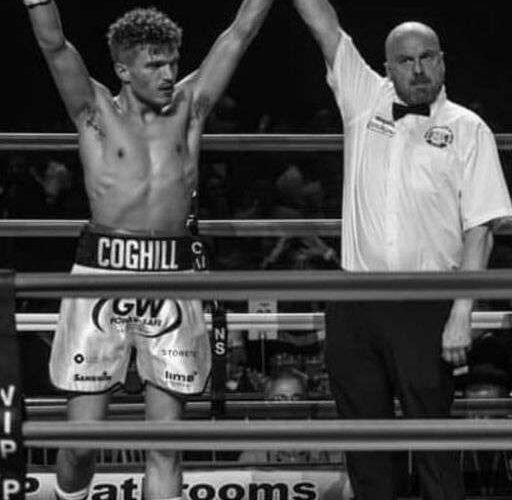 I am delighted to have had the privilege to interview Hull’s up and coming Featherweight Boxer, Connor Coghill.  The team at Lime are sponsoring Connor and this was a great opportunity to go behind and chat with Connor about his plans for the future and how he was training for his fight on Sunday 20th March against Michael Ramabeletsa.

A little bit about Connor:

Connor started boxing when he was 10 years old.  His step-dad was a big boxing fan and friend of Mick Bromby MBE, a level 4 England Boxing Coach at St Paul’s Boxing Academy in North Church Side and took Connor along to the boxing gym when we was fed up of being winded by his mates when fooling around.  Some of Mick’s most notable students include Olympic champion Luke Campbell and Commonwealth titleholder, Tommy Coyle – the latter who would later become Connor’s coach, and it was time for Connor to learn how to defend himself.

As a 25kg 11-year-old (compared to the average weight for that age, which is 37 kg) Connor found himself sparring with much older and bigger lads and really having to fight hard to make it through those training sessions.  With many a broken nose on his medical report, Connor says that those days really formed his determination to be a winner.

Connor moved to Stevie Smith Boxing Academy at the age of 16, training as an amateur boxer, winning 45 of his 65 fights, before turning Pro at the age of 22.  Becoming a professional boxer meant securing a professional licence from the British Boxing Board of Control and being dedicated to training approximately 5 hours a day when getting ready for a fight using a mixture of sparring, cardio, running, swimming and punching bag workouts.

As we caught up with Connor, he had just learnt the disappointing news that his opponent for the Central Area Feather Title had ‘pulled out’ for reasons unknown.  After having his boxing career put back 2 years during the COVID lockdown, he was very much looking forward to this fight and had been training for 7 weeks.  So whilst we await the news of his replacement opponent for Sunday 20th March, Connor continues his training.

So what does a boxer eat when training for a fight?

Well we have it on good authority from Connor that signing up for J-Jays meal prep is the way forward.  Clean, healthy food – chicken, rice, veg, salmon and even steak, whilst all of the time writing out a list of ‘firm favourites’ to indulge in post-fight, including a Domino’s Pizza and a family tub of Ben & Jerry’s Cookie & Cream.

Once the fight is over, Connor looks forward to a week away carp fishing in Hornsea, East Riding.  After 8 weeks of healthy eating you can rest assured that Connor will be throwing those fish back into the sea, he certainly won’t be eating them!